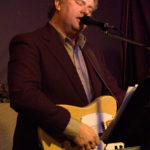 Midnight Express is led by musician, drummer, and vocalist Randy Holland. Randy performs music of all ages with his smooth voice, as well as his impersonations of a number artists including Conway Twitty, Elvis,
George Jones and more.

Randy was a two-time winner of “You Can Be A Star!” on the Nashville Network. His accomplishments include the hit single “We’ll Talk It Over” on the famous Hill Top Label out of Nashville,Tenn. and the “Razorback Boogie” which soared to #1 regionally when the University of Arkansas basketball team won the National Championship.

Randy made his singing debut on radio when he was four years old
also performed on his cousin’s T.V. show ” The Tommy Trent Show”
in the 60’s,  with his familys group “Variety Band”.

Randy’s ability to perform as Conway Twitty is incomparable. His moving voice and matchless style of delivery are so close to the original that Conway’s sister-in-law had to say, “It’s like hearing Conway sing one more time!”

We had a great time performing in Branson, MO 2020.

END_OF_DOCUMENT_TOKEN_TO_BE_REPLACED

We're proud to announce that our Garland Harris was named "Steel/Dobro Player of the Year" at the 2019 Arkansas County Music Awards. Congratulations!